Read 'The Ickabog' the latest book by J.K. Rowling for free 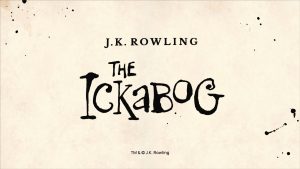 Here's the message from J.K. Rowling:

"The Ickabog will be published for free on this website, in instalments, over the next seven weeks, a chapter (or two, or three), at a time. It isn't Harry Potter and it doesn't include magic. This is an entirely different story.

The most exciting part, for me, at least, is that I'd like you to illustrate The Ickabog for me. Every day, I'll be making suggestions for what you might like to draw. You can enter the official competition being run by my publishers, for the chance to have your artwork included in a printed version of the book due out later this year. I'll be giving suggestions as to what to draw as we go along, but you should let your imagination run wild.

I won't be judging the competition. Each publisher will decide what works best for their editions. However, if you, your parent or your guardian would like to share your artwork on Twitter using the hashtag #TheIckabog, I'll be able to see it and maybe share and comment on it!

When the book is published in November, I'm going to donate all my royalties to help people who have been affected by the coronavirus. We'll give full details later in the year."