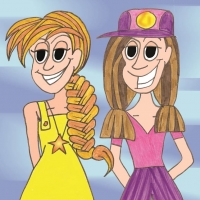 Producer: Manoel Theatre
Recommended Age: 7-11 Years old
Venues: Studio Theatre
Price: Child € 5, € 6 Adult
Schedule
Sunday, October 19 & 11.45am 201410.30am
Sunday, 02 November 201410.30am & 11.45am
Sunday, December 21 & 11.45am 201410.30am
Sunday, February 08 & 11.45am 201510.30am
Sunday, 12 April 201510.30am & 11.45am
Sunday, 24 May 201510.30am & 11.45am
DESCRIPTION
PIKuÅ»I is a project elaborated by Toi Toi involving six plays for children between seven and eleven
years old. This will be carried out in a creative and humorous for children to feel comfortable absorbing what is
going on. Afterwards a dialogue between children and actors on their experience will follow.
Dates:
19 October 2014: PikuÅ»i maltese proverbs and idjoms
2 November 2014: PikuÅ»i try different styles
21 December 2014 PikuÅ»i discover the value of family
February 8 2015: PikuÅ»i go Carnival
12 April 2015: PikuÅ»i experiencing defeat
May 24 2015: PikuÅ»i take a cup of tea with the Pepè Pippa!
Studio Theatre, 81 Old Mint Street, Valletta
10.30am and 11.45am
Who are Pik and Zi?
Pik and zi are two 10 yr old daughters living Malta in 2014. They have been close friends since
were small, always went to the same school and spend a lot of time at each others houses. As their name implies ,
these are two characters who are always ready for an adventure and not for the first time they challenge authority.
What topics will  PikuÅ»i be discussing?
The themes chosen were fueled by PikuÅ¼i own name and each letter initials a word
referring to the new society in which children live today. These include:
Maltese traditions
Individuality
Creativity
Time
Integration
What are the objectives of this project?
The aim of this project is that exposes children to the theater while tackling Maltese
sensitive issues that children are facing . Furthermore, we would not only expect children move into the theater, but
we move them as well. PIKuZI will be limited to a small audience so that the project is flexible
enough to move from one room to another. The aim is to create the possibility that
theater is more accessible to a much broader child audience.
This project was set up by:
Ruth Borg
Antonella Mifsud
Marta Vella
Mariele Zammit
When attending this event, Kindly say you saw it mentioned in www.maltababyandkids.com