23 Great Things to do with the Kids | Malta Baby & Kids 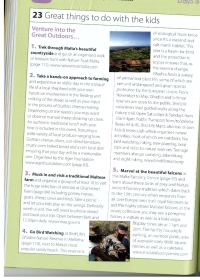 Venture into the Great Outdoors…

Trek through Malta's beautiful countryside and go on an organised walk or treasure hunt with Nature Trust Malta. www.naturetrustmalta.com

Take a hands-on approach to farming and experience an idyllic day in the tranquil life of a local shepherd with your own hands-on involvement in the feeding and milking of the sheep as well as your input in the process of Gozitan cheese-making. Depending on the season, you may assist or observe manual sheep shearing up close. An authentic traditional lunch with your host is included in this event, featuring a wide variety of local produce ranging from Gozitan cheese, olives, sun-dried tomatoes, crusty oven baked bread and a rich local dish ensuring that your day will be a memorable one. Organised by the Ager Foundation www.agerfoundation.com (page 83).

Muck in and visit a traditional Maltese farm and organise a group of at least 10 to visit the huge selection of animals at Ghammieri Farm (page 84) including ponies, horses, goats, sheep, cows and birds. Take a picnic and let your kids play on the swings. Definitely worth a visit. You will need to phone ahead and book your trip. Open between 8am and 12.30pm daily. www.mrae.gov.mt

Go Bird Watching at Bird Life's Għadira Nature Reserve in Mellieha, next to Malta's most popular sandy beach. This reserve is of ecological importance since it's a wetland and salt marsh habitat. This area is a haven for birds and the protection it enjoys ensures that, as the seasons change, Għadira hosts a variety of animal and plant life, some of which are rare and endangered and given special protection by the European Union. From November to May, Għadira and Is-Simar reserves are open to the public. Bird Life volunteers lead guided walks along the nature trail. Open Saturdays & Sundays from 10am-4pm. Public Transport from/to Valletta: Buses 44 & 45. Bird Life Malta also has its own kids & teens club which organises nature activities, most of which are outdoors, like bird watching, hiking, tree-planting, boat trips and visits to nature reserves. Teenage members also go camping, bike-hiking and night hiking. www.birdlifemalta.org

Marvel at the beautiful falcons at the Malta Falconry Centre and learn about these birds of prey and Malta's ancient falconry tradition which dates back to the 13th century when emperors from all over Europe sent their royal falconers to get the highly prized Maltese falcons. In the aviary collection you may see a peregrine falcon, a vulture as well as a bald eagle. Display times are at 11am and 2pm. The facility has ample parking, an outdoor picnic area of approximately 9600 square metres as well as a cafeteria. www.maltafalconrycentre.com

Delve into the world of bugs and beasties at the Museum of Natural History in Mdina (page 90), housed in the 18th century Magisterial Palace of Justice. There you can see important collections which hold over 10,000 rocks and minerals, over 3,500 birds, bird's eggs and nests, 200 mammals, over 200 fish species, thousands of local and exotic shells and insects. The fossil collection is also worth looking at, it contains a number of large fish, numerous species of sea urchins and other marine fauna found embedded in limestone rocks. Open Monday to Sunday: 9am-5pm; Last admission: 4.30pm. Closed: 24, 25 & 31 December, 1 January & Good Friday.

Sand castles are fun throughout the year. We're blessed with great weather provided the wind is not blowing too strongly! And above all it's free of charge and during the winter you'll probably have an entire beach to yourself. So go for it – while there you can let the kids get all messy with their paints – all they need is to gather some pebbles or shells or whatever takes their fancy and let their imaginations run free.

Planes, perhaps no trains but boats and automobiles….

Flying machines once flown by magnificent men can be viewed at the Malta Aviation Museum located on the site of Ex. RAF Station Ta' Qali (aka Ta' Kali). Try your hand at the controls of a BAC 1-11 passenger aircraft and walk around the restored and preserved war aircraft including a spitfire, tiger moth and Hawker hurricane. Catch bus 86 from Bugibba, bus 65 from St Julian's bus terminus and bus 80 & 81 from Valletta. Bus route number 65 is located just outside the Malta Aviation Museum Complex. Bus numbers 80, 81 & 86 stop 7 minutes walk away from the museum, follow displayed directions. Opening Times: Monday to Sunday 9am to 5pm except Good Friday, Easter Sunday, 15 August, Christmas Day & New Year's Day. www.maltaaviationmuseum.com

Ahoy captain! Jump on board a traditional local frejgatina  wooden boat and sail across Grand Harbour, departing from next to Customs House in Floriana to Vittoriosa marina. Once on the marina visit Malta's maritime museum housed in the former British Naval Bakery. There are several exciting exhibit rooms including the engine room machinery of the Anadrian, a steam-driven grab dredger built in 1951 for Malta. You can see a collection of detailed ship replicas and paintings illustrating 19th and 20th century vessels, together with an array of colourful ship badges organised into thematic and chronological sectors as well as navigational charts, nautical instruments, weapons, uniforms, anchors, maps, models and other artefacts dating from 1530 to 1798. An entire room is dedicated to traditional Maltese sea crafts and other objects that indicate popular traditions and Malta's long-standing maritime vocation. Open daily: 9am-5pm; Last admission: 4.30pm. Closed: 24, 25 & 31 December, New Year's Day & Good Friday. www.heritagemalta.com

Brmm, Brmm, Toot, toot your heart out at the Malta Classic Car Museum which covers approximately 3000sqm and is jam-packed with over eighty cars and motorcycles. The premises also houses a cinema, a comfortable cafeteria, gift shop, thousands of model cars and memorabilia. The museum is situated quite close to the Qawra bus terminus, in Tourist Street, Qawra. Open Monday to Friday 9am-6pm, Saturday & Public Holidays 9am-2pm. Bus no's from Valletta  49, 58, 59, 449, 499. Bus no's from Sliema 70, 652. www.classiccarsmalta.com

For trainspotters who are not too fussy, take a trackless train tour from the Roma Villa in Rabat outside Mdina and tour Rabat and the vicinity including Mtarfa for an 8km/30 minute tour. www.melitatrains.com

For the aspiring detective why not pay a visit to the relatively unknown, meticulously set up Police and Crime Museum at the Police HQ in Floriana. You can join a guided tour given by the Curator who will give a detailed explanation of every object on show. Open Monday to Friday 9am-4pm. Tel: 2122 4001

Head for Gozo and enjoy a day exploring the area of Xaghra where you can visit Ggantija one of the oldest temples in the world and then on to Calypso's cave and Ninu's cave where you can discover the stalagmites and stalactites and then on to the lovely Toy Museum in the village centre.

Feel the wind in your sails and learn to sail it's really fun and now it can be done by everyone! Various clubs around the island accept children from about the age of 8 years and up.

Venture to the new Adventure Park in Ta'Qali set on a section of the former runway at Ta'Qali, this exciting new addition to Malta includes an Interactive water fountain where water jets shoot up as children step near them, and a rope course of two storeys high for the older children .

Fancy meeting Neptune down in the depths of Malta's Mediterranean sea? Try a scuba diving session from one of the scuba diving centres. Some clubs accept kids from the age of 8 years and up but best to call and check in advance

The Maltese Islands are steeped in history waiting to be explored…

Go temple hunting and explore some of the oldest temples in the world including Hagar Qim and Mnajdra Archaeological Park , two of Malta's most visited prehistoric megalithic temples which both now boast a Visitor Centre equipped with hands-on displays and a family area with educational activities for all the family. www.heritagemalta.com

Go cave hunting and discover the earliest evidence of human settlement 144 metres down (though only the first 50 are open to visitors) at Ghar Dalam in the south of Malta where you can view the life size skeleton of a prehistoric dinosaur. Open Monday to Sunday 9am to 5pm. www.heritagemalta.com

Get scared silly and go on a small group tour, especially designed for kids aged 6 to 15 years, of the ancient cities of Malta including Valletta, Mdina and Birgu and hear spooky stories of days of old when Knights were bold. www.yourmaltaguide.com

Step into the boots of the Knights of Malta and visit the Grand Master's Palace and armoury packed to the gills with armour, swords, helmets and halberds – a spectacular arms collection bound to impress young aspiring Knights. www.heritagemalta.com

For aspiring soldiers a visit to Fort Rinella in Kalkara is a must! Malta's liveliest museum where history comes to life daily from Monday to Sunday at 2.30pm sharp. Volunteers dressed as late 19th century Victorian soldiers will take visitors on an animated tour around the fort. This tour combines excellent guiding with lively and colourful historical re-enacting. The tour starts with the firing of an original Victorian cannon (which you can also fire!). This is followed by a live demonstration of how the fort would have been defended during an attack. The group is then directed into the fort only to be challenged by the sentry guarding the gate. More displays will take place inside the fort including military signalling, firing of rifles, bayonet practice, military cooking and more. Much use of original period equipment and weapons is made throughout this tour. Opening Times: Monday – Sunday: 9am to 5pm. Catch bus no 4 to the Fort from Valletta. www.wirtartna.com

To read this, and many other interesting articles, purchase the latest edition of the book here!