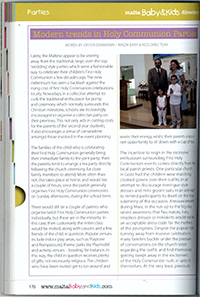 Lately, the Maltese appear to be veering away from the traditional ,large ,over-the-top ‘wedding’ style parties which were a fashionable way to celebrate their children’s First Holy Communion a few decades ago. The new millennium has seen a backlash against the rising cost of first Holy Communion celebrations locally. Nowadays, in a collective attempt to curb the traditional enthusiasm for pomp and ceremony which normally surrounds this Christian milestone, schools are increasingly encouraged to organise a collective party on their premises. This not only aids in cutting costs for the parents of the second year students; it also encourages a sense of camaraderie amongst those involved in the event planning. The families of the child who is celebrating their First Holy Communion generally bring their immediate family to the joint party; then the parents tend to arrange a tea party directly following the church ceremony, for close family members to attend. More often than not, this takes place at home, and would last a couple of hours, since the parish generally organises First Holy Communion ceremonies on Sunday afternoons, during the school term. There would still be a couple of parents who organise lavish First Holy Communion parties individually, but these are in the minority. In this case, then customarily the entire class would be invited, along with cousins and a few friends of the child in question. Popular venues include indoor play areas, such as Playzone and Romparound, theme parks like Playmobil and activity venues –bowling, for instance. In this way, the child in question receives plenty of gifts, not necessarily religious. The children who have been invited get to run around and waste their energy, whilst their parents enjoy a rare opportunity to sit down with a cup of tea. The incentive to reign in the excessive enthusiasm surrounding First Holy Communion events comes directly from the local parish priests. One particular church in Gozo had the children wear matching cloaked gowns over their outfits, in an attempt to discourage meringue style dresses and mini groom suits in an attempt to remind participants to dwell on the true solemnity of the occasion. Announcements during Mass, in the run up to the big day, raised awareness that fascinators, hats, strapless dresses or miniskirts would not be an acceptable dress code for the mothers of the youngsters. Despite the popular tide turning away from massive celebrations, many families buckle under the pressure of conversations on the church steps regarding the outfit, and find themselves getting swept away in the excitement of the Holy Communion rush, in spite of themselves. At the very least, previously blasé couples will go out and buy new outfits for themselves and their offspring, and order a cake and catering for their family gathering in order to celebrate.  Party  venues  and  animators  have  suffered  because  of  this  contemporary  tendency  to  pool Holy Communion parties’ together-resulting in less individual bookings for them. Since most schools tend to host the party on their own grounds, thus saving on cost, conventional party venues  are  finding  innovative  ways  to  encourage  individuals  to  host  their  First  Holy Communion  parties  at  their  site,  by  offering  early booking  discounts  .The  Parent  Teacher Association often spends a large portion of their budget on animators, as ,after all,this is a party for children and the purpose of the festivity is for the children attending to have a lot of fun.

For school based First Holy Communion parties, the services of large animation companies which cater for big groups of children are often utilised. Bouncy Castles,magic shows and high energy organized games are very popular with children of this age group. Catering, complete with staff, cutlery and crockery are outsourced which ensures plenty of refreshments for young and old alike. First Holy Communion communal parties normally follow a brief procession, followed by Holy Mass.  In short, Holy Communion parties in Malta have come a long way from the stuffy church hall, filled with aging relatives, during which the bored celebrant would receive a multitude of religious icons and Holy Bibles. Nowadays, those families concerned are focussing more on the religious significance of the occasion, and less on outdoing one another through outlandish celebrations. Long may it continue!